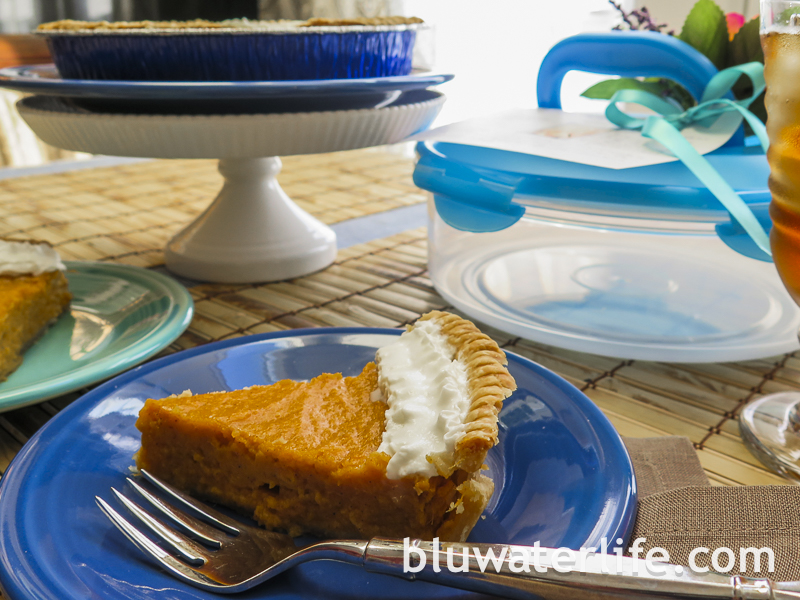 We have a small dilemma at Thanksgiving. Bluwatermom does not like pumpkin! So I’m sharing a southern tradition that is a great alternative to pumpkin pie ~ my grandmother’s favorite Sweet Potato Pie! I’m doing this the way my grandmother would have, and she was the queen of aluminum pie pans. Living through the Depression and two world wars, she could NOT throw away an aluminum pan or piece of foil if it could be reused. We would tease her about all the dinner roll trays and pie pans, and she would say, “I’m teaching you girls to have saving ways”! So this pie is in an aluminum pan, just like grandmother would have made it. I don’t think I ever saw her with a recipe card. She turned out a traditional Sunday dinner, and the whole family makes her vegetable soup, but she wasn’t much for baking. She was however, all about canning, preserving and saving anything and everything my granddaddy grew in his garden. She put up all sorts of vegetables, filled the chest freezer and made jam from cherries, peaches and figs. The only dessert we all know she loved was sweet potato pie ~ which probably also came from the garden. Bluwatermom and I talked about grandmother’s cooking. If she had a piece of fried chicken and piece of sweet potato pie, she was a happy women. So I decided to revive grandmother’s pie and start filling in some missing family recipes. I compared lots of recipes online, and came away with a hybrid that I think is what grandmother made ~ and the first bite sold me! Tastes just like what I remember from her kitchen, and I think the aluminum pie pan is part of the magic! The recipe is at the end of the post ~ but first I want to introduce my Grandmother Nellie. Yep, this is Bluwatermom’s mother. I also introduced my paternal grandmother in earlier posts here and here.

This is how I always remember her. She had white hair at an early age, and I don’t remember her any other way. I liked this photo so much I used it on the recipe card I created for the pie recipe. Here’s the card I created with PicMonkey photo editing software. There’s a good tutorial on their site and I found this one from homecookingmemories.com to he helpful too! I’m going to use these recipe cards to fill in some missing family favorites and share them with family members. If it was potluck Sunday at the church, Grandmother Nellie may have made two pies ~ one to keep and eat, and one to take. So I made two 8″ pies, in aluminum pans, and added the recipe card to a pie carrier for Bluwatermom ~ I think Grandmother would approve!

Break apart sweet potato in a bowl. Add butter, and mix well with mixer. Stir in sugar, milk, eggs, nutmeg, cinnamon and vanilla. Beat on medium speed until mixture is smooth. Pour filling into an unbaked pie crust. Bake at 350 degrees F for 55 to 60 minutes, or until knife inserted in center comes out clean. Pie will puff up like a souffle, and then will sink down as it cools. Glad to share my Grandmother Nellie’s Sweet Potato Pie. If you’re like Bluwatermom and are looking for something other than pumpkin for your Thanksgiving pie, this one will do the trick! Enjoy the holiday y’all ~~~