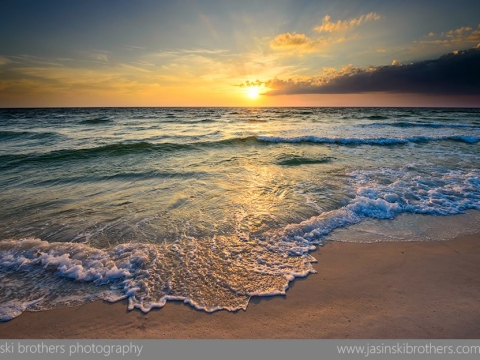 What would you change in your life to go chase your dream? Would you give up traditional ideas of security for travel to exotic tropical destinations? We all like to think about it, so now let’s talk to Michael Jasinski about doing it! Michael and his brother Brian are Jasinski Brothers Photography based in Gainesville, FL ~ and their work is amazing! We met Michael and Brian years ago at the Yellow Daisy Festival in Stone Mountain, GA. We saw their beautiful photography at the show, stopped to talk and discovered they were at UF during the same years as Bluwaterguy. After a few minutes of “do you remember? and did you know?” we were connected ~ and we’ve gone back most every year to add a piece to our small collection.

This year Michael was at the show in Stone Mountain, while Brian was in Florida handling other parts of their business. We were able to have dinner with Michael and talk about how they started Jasinski Brothers Photography, some of their travels, and how they approach their work.

Michael shared that the idea for their business came about while he was visiting with Brian in Colorado after they both finished UF. Brian had done some photography while living in Colorado, and sent a few prints to Michael in Florida. Michael framed them at a local shop, and the shop owner wanted to get copies and sell them in the shop. An idea began to form in Michael’s mind, and when visiting with Brian in Colorado in 1999 they discussed it. Brian and Michael returned to Florida, and the business was born.

Neither of them had formal training in photography ~ they majored in accounting and criminal justice at UF ~ but they had a love for learning and an eye for beauty. After getting started with coastal locations around Florida and the southeast while working their day jobs, they planned their first big destination shoot to French Polynesia in 2003. Digital photography was new, so they planned to shoot both film and digital over the 3 week trip. They took a LOT of gear! Things did not start out well and they were disappointed in 1st week of the shoot, especially considering how much of their savings were sunk into this first big all-or-nothing trip. Things improved by the 2nd week, and they ended up with beautiful images from several islands they visited. After that they never looked back! With travel, shows and running the business, the brothers work hard. Here’s a photo of Michael at a show in Ann Arbor, and other photos of their set up at the Stone Mountain show. Printing, framing, shipping, and running the website keep things busy in Gainesville.

Michael is restoring a house on a lake in central Florida that is now his home base, and doing a lot of photography all around the state. He feels a real passion for capturing images of the “real Florida” ~ from the panhandle to coasts to the center of the state. Lakes, beaches, swamps and glades ~ and his own backyard. Talking with Michael definitely brings to mind a surfer looking for the perfect wave. Sometimes things are set perfectly ~ the location, the weather, the equipment ~ and still the shot doesn’t quite come off they way it’s envisioned. Other times nothing is going right ~ the light is fading, the set-up doesn’t work, and running down the beach carrying the tripod is going nowhere, then suddenly the moment happens, and it’s perfect ~ like the “Whispering Wave” photo at the top of this post. This one of Michael’s favorites ~ and I can see why!

Over dinner we talked about things we all hope for the future ~ personally and professionally. Michael is so encouraging you can’t help but feel that anything is possible. He wants people to believe in themselves and try to accomplish their dreams. We all have ideas, and like to think about “what if” ~ Michael wants people to make it so! I think he could have another career mentoring and encouraging aspiring artists and entrepreneurs!

Drafting up this post and checking their Facebook page, I saw this update ~ “Drove for hours and hiked for miles looking for the perfect shot today. Didn’t get the shot, but had a blast anyways!” I don’t know if the update came from Michael or Brian ~ but it perfectly sums up what they’ve shared with us in conversations. It’s about the journey, not the destination, and it’s a blast along the way. Mahalo boys! 🙂