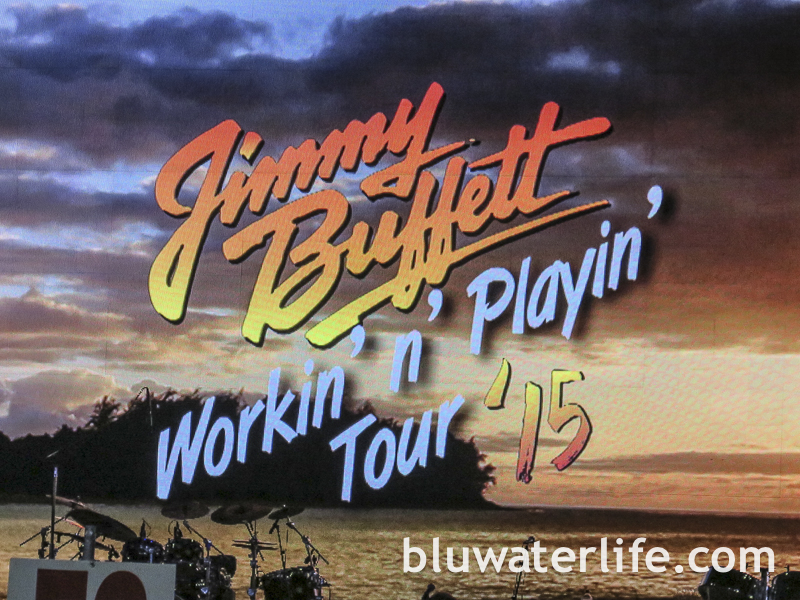 Welcome to our tiki bar tailgate 2015 & the Jimmy Buffett concert!

I’ve lost count of how many Jimmy Buffett concerts I’ve been to over the years ~ but my first was in 1988, so let’s just say there have been a lot. We’ve been doing our bluwaterlife tiki bar tailgate for several years, and there are Facebook albums for them since 2011 ~ including a new one for this year!

One new thing this year ~ the concert was indoors at the Gwinnett Arena ~ the first time I’ve ever seen Jimmy at an indoor venue. Have to say having the audience closer in with the tiers of seating vs spread so far back in an outdoor amphitheater seemed to bring the experience closer together ~ and I did not mind the AC at all! First time ever to be cool and comfortable at a Buffett show! The tiki bar sign was there of course, and we were flying the bluwaterlife flags. The weather gods smiled on us ~ it was a beautiful afternoon! And the cordless Margaritaville frozen concoction maker was there as always for frozen drinks. It’s basically a power tool that makes drinks. Our neighbors kept coming over to check it out. Several confessed to blender envy ~~~ This paper “Hula Girl at Heart” has been to all of our tiki bar tailgates. She is showing some wear and tear, but she feels like a mascot at this point and I can’t leave her out. Oh the stories she could tell! We were parked and set up by 3:30ish for the 8:00 show. Very much like tailgating for a night-time football game! Food and drink are ready to go. As always it’s important to pace yourself ~ it’s quite a while to show time! A nod to a surf and turf menu with marinated steak kabobs and shrimp cocktail. The steak was a Pioneer Woman marinade recipe with tons of flavor. And I made Bluwaterguy’s cocktail sauce for the shrimp. Bluwaterguy going back for seconds. He is our official hand model 🙂 Bluwaterguy decided his chair cup holder was meant for his shrimp cocktail! And the Key Lime cupcakes were a hit with our tailgating neighbors. One left for me! And now it’s concert time! There were 27 songs on the set list, including an amazing steel drum medley by Robert Greenidge. Here’s link to the set list ~~~ Bubba is doing fine for 68, and is always happy to play in Atlanta. He had lots of stories to tell along with the songs as usual ~~~ And another fave ~ ONE PARTICULAR HARBOR ~~~ And the phone flash is the 21st century bic lighter. Encore! Just Jimmy for the encore ~ TRYING TO REASON WITH HURRICANE SEASON ~~~ There are more photos on the FB album page, but I hope these give you the flavor of the event ~ because it is an event, not just a concert. JB is still going strong. I wish I had half his energy. He literally went on his knees at the end of KNEES OF MY HEART and sprang up like the Energizer Bunny. At this point if I go to my knees, there’s no springing up! I blame it on too many broken bones, but even JB has been through that too!

If living by the ocean and doing what you love keeps you young, JB is the poster boy to that testament. Wonder if I move to the ocean if I can reverse the aging process? May just have to find out! Until then we have his shows to share a taste of the life. Fins up y’all ~~~