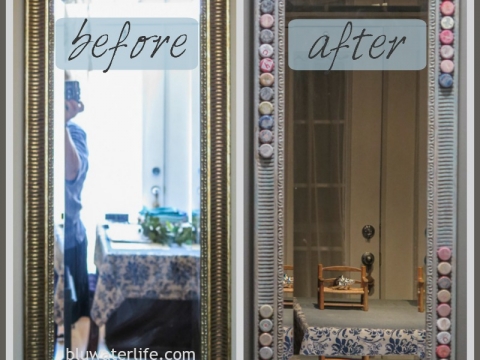 You know when you see something unique ~ that special accent that changes a whole look ~ and you can’t get it out of your head? That’s how this DIY bottle cap mirror frame came about ~ blame it on a bar in the Caribbean!

This project isn’t going to be everyone’s style, but it works for me. I’m re-doing the bar alcove ~ new wall paint and bar cabinet restyle ~ and decided to change-up the existing mirror just for fun. The whole reveal will be on the blog shortly, but today is all about this quirky mirror project.

Here’s the before ~ gilded frame mirror on khaki wall color. I’ve had this mirror forever, and there was nothing wrong with it, but I wanted to change it up. Once-upon-a-time in a Caribbean bar, I saw bottle caps used as trim all around the edge of the wooden bar. It struck me as interesting and I’ve always wanted to do something similar, but on a smaller scale. Seemed appropriate for the bar alcove, so I did! First I covered the beveled mirror glass with paper, so I could paint ~~~ Then I dry-brushed a bit of Annie Sloan Chalk Paint in Provence ~ sort of a turquoise patina on top of the gilded frame. Most of the time, you would rub a coat of furniture wax on top of the paint for some subtle sheen, UPDATE ~ after finishing the chalk painted bar cabinet with Miss Mustard Seed’s Furniture Wax, I decided I liked the effect and added wax to the mirror frame. Here’s the result ~ Bluwaterguy took on the challenge of saving beer bottle caps for me. Oh, the sacrifices he makes for my projects! Fortunately he likes different beers, and we saved bottle caps for AGES ~ years even. I had quite a sackful just waiting for a project! I dry-brushed a very small amount of ASCP in French Linen on the bottle caps to knock down the shine. Chalk paint sticks to most anything, and worked well to age the bottle caps a bit. Small squares cut from a sheet of craft foam and hot glued under the caps gave a flat surface to glue on the frame. I laid the bottle caps on the mirror frame a few different ways until I was happy with the look. In the end, I did not do a complete row of bottle caps all around, but left some empty spaces ~ and I can always add more later if so moved. Once the bottle caps were glued in place, I dry-brushed a bit more of the French Linen chalk paint to even up the finish. I’ve also changed out the wall paint from khaki to my favorite gray. Originally a Martha Stewart color called PASTURE GATE, I’ve used this gray in my entry and downstairs powder room. I like it because it has no green, no pink, no blue undertones~ just neutral gray with the slightest touch of brown. Of course since I love it, the color is discontinued! I have my original paint chips and take them to be color matched ~ I think the paint counter staff hides when they see me coming! And here’s another shot taken at night with overhead light ~ something I never do ~ but it shows the trimmed edge more clearly. Using the chalk paint to aged the bottle caps a bit, they almost look like buttons until you look closely. 🙂 Here’s the before and after side-by-side. I like the results and it does remind me of that memorable spot in the Caribbean ~~~ And yes ~ call it the power of suggestion ~ but I had to have a beer when I finished. And there are PLENTY more bottle caps for another project! I’m still working on the bar cabinet restyle ~ there’s more chalk paint in Provence and French Linen ~ and a few other touches. Though the space is small it is taking quite a bit to get it the way I want it. Here’s a link to the original look. At least the walls are freshly painted ~ oh, and I have a completely new floor throughout the downstairs! The floor project was the impetus for a lot of updates. Once you start you may as well go for broke!

My mirror project is finished, and though it may not suit everyone’s style, it makes me smile. And I have so many more bottle caps saved up, who knows what else I may do! Cheers y’all and come back to see my tiny bar alcove space completed shortly!