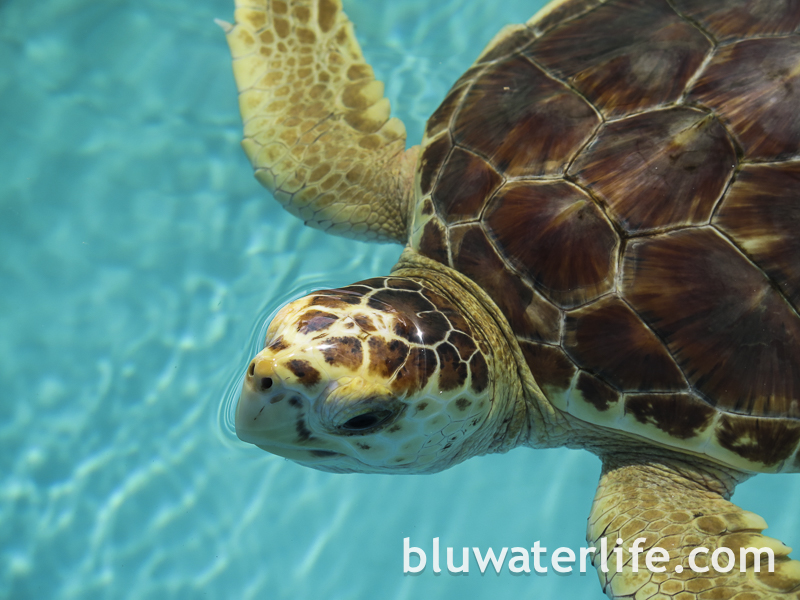 Welcome to the Turtle Hospital in Marathon, Florida Keys 🙂 ! welcome to the turtle hospital ~~~

A Turtle Hospital visit has been on my list for years, and we made the stop in Marathon as part of our Florida Keys road trip ~ yay! I love sea turtles as a scuba diver and one of my most memorable dives was in Cozumel on my birthday ~ with a huge loggerhead turtle 🙂 .

A retired business man bought the 1950’s era Hidden Harbor Motel in Marathon in the 1980’s, and converted the original swimming pool to a salt water aquarium pool with local fish to entertain guests. Realizing the importance of sea turtles, he got the required permits and took in two injured green turtles for rehabilitation in his pool aquarium. The hospital operation was funded by Hidden Harbor Motel until Hurricane Wilma in 1995 flooded the entire property causing extensive damage. The hospital reopened in 1996 solely as a non-profit organization, and today the motel property houses the offices, staff and veterinary teams ~ who sometimes need to be there 24/7 to care for turtle patients.

The visitor center is full of information about the hospital, different turtle species found in the Keys, and education on threats to sea turtle survival and how humans can help. I knew a bit about sea turtles before the visit, but I learned a LOT more, and had fun too!! easy to read, informative displays ~ and yes, I tried to read everything 🙂

The visit starts with an introduction from the staff guide and a video about the different sea turtle species at the hospital. Worldwide there are 7 species, and 5 of these are found in the Florida Keys! All are protected species, and should not be touched or handled by humans. The Turtle Hospital runs a 24 hour hot-line to report Florida Keys turtles in distress, and partners with the Florida Fish and Wildlife Conservation Commission and the Coast Guard for response. the turtle ambulance is on call 24/7 for hotline response!

The Turtle Hospital is the only state-certified veterinary hospital in the world for sea turtles. The hospital building was originally a bar on the property, and has been equipped largely through donations from hospitals, doctors, other organizations and people like us! This room is the first stop for rescued turtles, where they are examined and treated. Many have surgery to repair damaged shells, remove tumor growths, and deal with line entanglements. Fishing line, plastic six-pack can holders and plastic bags in the water can result in amputations and death for turtles who mistake the junk for a jelly-fish meal. Keep your trash and plastic junk out of the water folks!! the only patient here today is a pillow buddy 🙂

The hospital’s mission is rescue, rehabilitation and release. They have rescued, rehabilitated and released over 1400 sea turtles in the past 28 years. Some turtles are rehabilitated but cannot be released due to permanent injury, and most of them find “forever homes” at aquariums around the country. Only one turtle ever returned with other injuries after release. Her name is Sapphire ~ she was originally found in February 2010 and released after 45 days of treatment, then found injured again from a boat strike in May 2013. After a year of convalescing at the hospital, she is on her way this week to an aquarium near San Diego!  The original motel pool, now salt water aquarium is home to the 5 permanent residents ~ and other turtles who have been injured and treated but cannot be released while they wait for their “forever homes”. Boat strikes can permanently damage a turtle’s shell, leaving them either unable to submerge and dive for food, or unable to surface from the bottom to breathe. These injuries are managed with weights that are attached to the shells so that the turtle can dive, or flotation sponges to help them stay at the surface during healing. Just like a weight belt and BCD for scuba divers! When a turtle can’t dive due to air trapped inside the shell from injury, it’s officially known as “bubble butt syndrome”! The first turtle with this documented injury is a permanent resident named Bubble Butt. He’s been at the hospital 25 years and he’s pretty famous in the turtle world 🙂 . buoyancy injuries are managed with weights or flotation sponges

The hospital also rescues stranded hatchlings and raises them until they are large enough to release. I hope this little loggerhead lives to be more than 100 years old when released 🙂 . I hope this little loggerhead lives for 100+ years after release!!

Residents that are in treatment are housed in large salt water tanks, either in isolation or group tanks, depending on their status. I snapped this one swimming in one of the group tanks. I think she (or he) should be a “turtle spokesmodel” ~ I mean come on, how cute is this!! There’s an album on the bluwaterlife Facebook page with more photos of the hospital and patients, and pictures of turtle cuteness! this little youngster needs to be a “turtle spokesmodel” don’tcha think?

The hospital treats a variety of turtle ailments and injuries, including shell damage from boat impacts, flipper amputations caused by entanglements and intestinal issues. So much knowledge has been gained by the work of the hospital, including research along with veterinary colleges into debilitating viral tumors, called Fibropapilloma, that affect over 50% of the sea turtles in the Keys and around the world. Removal of these life affecting tumors is the most common surgery performed at the hospital. Visitors from all over send get well wishes to the residents and patients, and you can “adopt” one of the permanent resident turtles.  I think I owe Bubble Butt some adoption love, because as a scuba diver I can relate to his status! We had such a good day when we visited the Turtle Hospital. And wait to you read about our visit with dolphins on the same day!! A perfect day during our Florida Keys road trip, and still more to come. Hope you stay with us on the journey ~~~