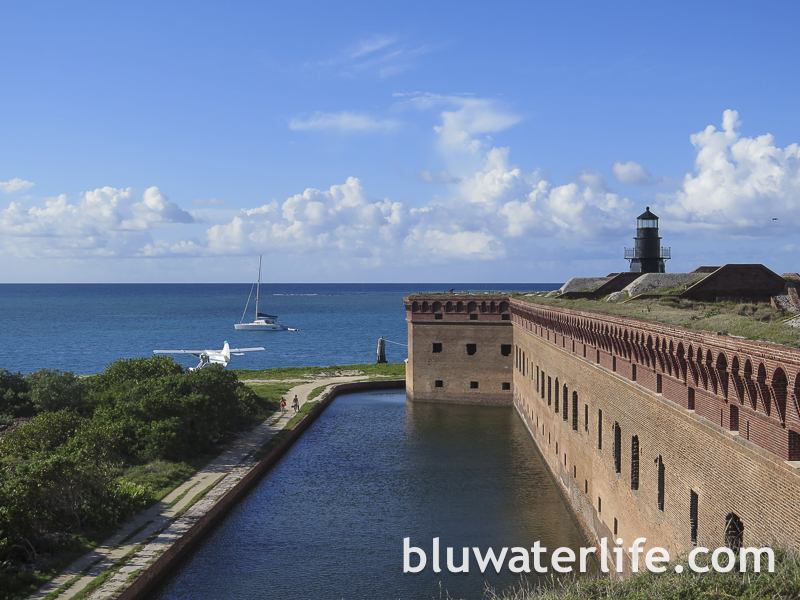 Fort Jefferson, Dry Tortugas ~ a bluwatergetaway adventure decades in the making! I’ve wanted to do this day trip for such a long time, but it never seemed to work in the schedule on previous Keys trips. I’ve always been scuba diving, or with a group, or there was just too little time, or too little money ~ but this was the year 🙂 . And we went by seaplane!! Fort Jefferson, the largest all-brick fort in the United States ~ built between 1846 and 1875 ~ with intended to protect the nation’s water gateway to the Gulf of Mexico. The first thing I hear from folks when talking about this adventure is “Huh? Ft.what? Where? In the sea? Why is it there?”. Though it’s a famous and beautiful part of our national history, many folks don’t know it even exists. soooo AMAZING to see this from the plane ~~~

The Dry Tortugas ~ a group of seven small islands roughly 70 miles west of Key West, Florida ~ are on the edge of the main shipping channel between the Gulf of Mexico, the western Caribbean, and the Atlantic Ocean. Shallow waters with low, flat islands and reefs were a serious navigation challenge for ships passing through the 75-mile-wide Straits of Florida. The strategic location of Fort Jefferson was intended to control the surrounding waters and the only deep channel in the straits connecting the Atlantic Ocean and the Gulf of Mexico. If you control the main access points, then the only other way through to the gulf meant small boats and lots of danger. Sort of like controlling the intersection of I-85, I-75 & I-20 in Atlanta with huge cannons. Oh wait ~ General Sherman sort of did that and we know how that turned out!! Ultimately, the fort was never completed due to design problems and construction issues, but just the threat of the huge cannons had an impact on shipping and blockades. It was used as both a Union military installation and prison during the Civil War. inside the fort ~ the original lighthouse

Fort Jefferson was designated a National Monument January 4, 1935. The covered area was expanded in 1983 and redesignated as Dry Tortugas National Park on October 26, 1992. As a National Park, Fort Jefferson is the setting for FLASHBACK, an Anna Pigeon novel by Nevada Barr. I love this series, as every novel is set in one of our National Parks. I am re-reading this one now, having just visited and that makes it even more interesting! yes, we are going by SEAPLANE ~ on the early flight!!

And now to the seaplane part of our adventure! There are three ways to visit the park ~ private boat, daily ferry, or daily seaplane flights. While I wish we could cruise up from the Caribbean on our private sailboat, that is only in my dreams! The ferry is also a good option, but it takes a full day ~ with several hours on the boat ~ and there are many more people on the trip. Going by seaplane ~ especially on the first flight of the day ~ means you get there in roughly 30 minutes, have SPECTACULAR views of the water, islands and fort from the air, and arriving before the ferry means you get a very private time on the island to tour the fort. Plus there is that whole cool thing about landing in the water and taxing right up to the beach ~ I mean c’mon now ~ really 🙂 . So we woke up really early (at least in terms of vacation wake-ups) to get ready for the day and make the 7:30 airport check-in. I tell you, the folks at Key West Seaplane Adventures everyone gets a window seat 🙂

It’s fast, breezy and loud once underway, so everyone wears a headset. There is a combination of travel narration, pilot info and commentary and soundtrack for the trip. The flight path is the same both ways and if you sit in the same seat, what is on your left going out is on the right on the return, so you don’t miss a photo opportunity. We sat in the rear-most seats by the doors ~ their version of the exit row ~ so even 6’6″ Bluwaterguy had enough leg room. I’ve seen the aerial views of the fort in so many photos over the years, but actually seeing it live from the air was truly a moment for the “life enjoyed bucket”. Be still my heart ~~~ the scale of this place is huge ~ and there is a MOAT, in the middle of the SEA!

We had plenty of time to walk the grounds and the fort. You can walk the third/top-level most of the way around and the views are simply gorgeous. Yes, it’s hot and humid, and there are flying, biting pests, (even at 8:30 in the morning) so be prepared ~ but it is soooo worth it! I had to shake my head at the sight of this enormous fort in the middle of the sea ~ with a moat and drawbridge yet ~ and think of the 19th century audacity to undertake such a project. I wish I could say that’s my sailboat in the distance ~ but I can say that’s my plane ~ at least for today 🙂 . these bricks traveled a LONG way ~~~

The bricks came from Pensacola, FL and the mortar from NY state ~ so they traveled a long way to this spot. There are great photo opportunities everywhere you look. I added a photo album to the bluwaterlife Facebook page to share more shots. Also planning to added a video as soon as it’s ready. Give a LIKE to the FB page for updates!

seaplane, private boat or ferry ~ those are your travel options

After we toured the fort, we spent a bit of time snorkeling around the base of the exterior moat wall. It’s clear and shallow with nice small fish and coral, but beware of jelly fish if the tide and conditions are bringing them in ~ and do snorkel before the ferry comes arrives. It kicks a big wake wave and really stirs up the visibility. And in a last random, cosmic wink related to this trip, I have to share Bluwaterguy’s connection. His great, great, great something relation (let’s just say many generations, and we think it’s an uncle) Brevet Major General John Hartranft was the Civil War Union General and later Pennsylvania Governor, who sentenced the “Lincoln Conspirators” to their various fates ~ death for some, life imprisonment for others. One of the most famous conspirators was Dr. Samuel Mudd, who set the broken leg of assassin John Wilkes Booth. Dr. Mudd and others were imprisoned at Ft. Jefferson ~ and I took the photo above from the spot of his cell. We don’t know if other Hartranft relations have taken this same adventure trip, but Bluwaterguy was the only one standing in Dr. Mudd’s cell on this day. Funny how that came to be ~~~ And here we are on the return trip ~ sandy, salty, a little too much sun and a lot of blurry ~ but very happy. And let me tell you, it is not easy to selfie in the vibrating tail section at 130 mph! Hope you enjoyed this adventure from our Florida Keys road trip. I’ve already shared a modern bridge, a scenic bridge and and now this historic fort! There are lots more posts for the series yet to come ~ dolphins, and turtles, and some classic Keys moments. All the posts are tagged #flkeys to group them in a search, so hope you keep joining us on the journey ~~~