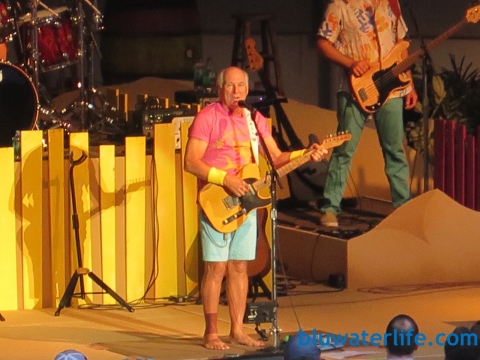 Welcome to my tiki bar tailgate 2014 & the Jimmy Buffett concert 🙂

Tuesday night in Atlanta on May 27th was only the 2nd stop on the new “This One’s for You” tour! This year Jimmy changed venues ~ from the big ol’ Lakewood amphitheater south of town, to the smaller amphitheater in Chastain Park ~ and he last played Chastain 27 years ago! He took a beating online for the change ~ from 12,000+ seats with a huge lawn to maybe 7000 seats with almost no lawn. And some folks were NOT happy about it.

I love Chastain, as you can tell here and here ~ and it is 15 minutes from my house, so I was fine with the change. Oh well, ya can’t please everyone ~ and at this point, I think JB is just trying to mix things up for himself, the band and the fans. Works for me! I have been to more Buffett concerts than I can count over the years. This is our 4th year with the tiki bar tailgate. If you visit any other years ~ 2011, 2012, 2013 ~ you’ll see a lot of the same decor, just switched up a bit each time. I do swap around some of the table top settings, from the shameless amount of picnic stuff acquired over the years, but there really is just one small garage tote of decorations ~ and they have been used to death. At this point it’s tradition, and who knows what next year holds? the frozen concoction maker was there of course 🙂

With smaller parking areas (we always park in the Blue lot), and a shorter window for tailgating at Chastain, I did pare back some this year. A bit less food and decor, but we still did our thing. Oh, and we went in my smaller Mariner SUV instead of Bluwaterguy’s big F150 ~ a concession to smaller neighborhood streets and parking constraints ~ but there was plenty of room for our set up.

It was a warm afternoon, and we had a nice shady spot. We were a popular stop for folks walking around, and we met lots of nice people. Once again the sound from the (cordless!) frozen concoction maker was quite an attraction 🙂 and yes, we were tailgating next to the crew tour buses!! This year, we had tequila lime chicken, fresh pico de gallo, and lots of fixin’s. Soft tacos, nachos, salad ~ any way you want to do your chicken! I went for a taco/burrito combo thing ~ and it was good! and then there was dessert ~~~

S’more bars ~ ooey, gooey and a little melty in the heat ~ almost like they came off the campfire 🙂 Chocolate bars, marshmallow fluff and graham cookie layers. They were a hit with neighboring tailgaters ~ you know you want one! welcome back to Chastain after 27 years Jimmy!

You get the picture from this that we were not as close to the stage as we have been in previous years at Lakewood. True, but it doesn’t matter because any seat at Chastain is pretty close up. The seating is more spread out, wide rows, and MUCH more comfortable than the folding chairs at Lakewood.

This is my first outing with my NEW CAMERA. Hallelujah ~ birthday funds from Bluwatermom!! It’s a Canon Powershot G16, and I love it!! I would never have gotten these zoom stage shots with my old point and shoot. I’m still learning, but the pics are good just on the full auto setting 🙂 for now. With the smaller stage, we didn’t get the rear projection video screen that goes with the tour, but we did get a very up close session with the core band. Jimmy is streaming this tour on his new internet station margaritaville.tv (good on ya Bubba!). I’ve seen the video screen in later tour stops broadcast this week. The Atlanta show didn’t make broadcast because (I am not making this up!) raccoons chewed through the wires. Lord love Chastain! Jimmy sings MY HEAD HURTS, MY FEET STINK AND I DON’T LOVE JESUS ~~~

Some songs from the way back Key West days, to the all time faves of course, and some new ones from the last couple of albums. The crowd sang along with them all. Tina and Nadira ~ the Lovely Reeferettes

I swear I do not know how Tina and Nadira do over 2 hours of non-stop full on singing and choreography in every show, and never even seem out of breath. I have to sit down between songs and I’m basically just standing and clapping. Guess I will never make it as a Lovely Reeferette! ~~~ and guess what we are doing here? ~~~ and the barefoot pied piper leads us through FINS 🙂

The encore was LOVELY CRUISE with the refrain of course, “drink it up, ’cause this one’s for you, it’s been a lovely cruise” ~ as the band members left the stage one by one during the song, leaving Jimmy alone with his guitar to finish it out. Then they all returned together for one last quick curtain call and wave to the audience.

There are 20 stops planned for this tour ~ really small considering the size of the band and crew ~ which is one motivation behind free streaming on margaritaville.tv ~ gotta share with the fans. Bubba is 67 years young and he can do what he pleases, but he does always remember that it started with the Parrot Heads and pays homage to that in every show.

Who knows what next year brings?