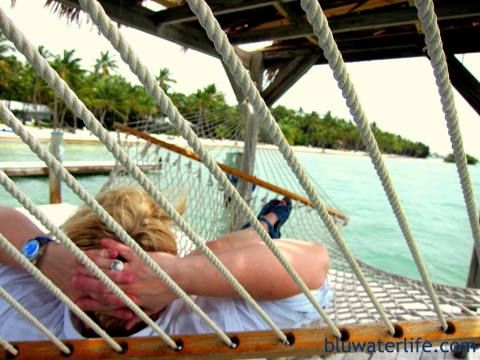 OK Debbie ~ no one invited you to my vacation!

That’s Tropical Storm Debbie, who has dumped a deluge of rain all over the state of Florida. We mostly dodged her in Orlando, and enjoyed our one long day at Disney ~ but then she pelted us with rain off and on all the way into the Keys ~ including our arrival in Islamorada yesterday evening during a gale force storm. Fortunately our 1936 cottage at The Moorings Village resort has weathered a lifetime of storms and I can’t think of a better place to take shelter. The rain and wind pounded us last night, but our little cottage was snug and quiet ~ a real feat for a tin-roofed cottage surrounded by palm trees only 100’ from the beach!

The rain has moved on today ~ though a 25 knot wind has remained. There are white caps on the water, but the sun is shining ~ and with all the wind, there aren’t any pesky mosquito worries.

I took some time to read up on Islamorada history this morning before getting out and settling into one of the many hammocks here. Bluwaterguy told me, “Pace yourself. You don’t have to use every hammock on the first day.” ~ but, I have ended up here in the dock hammock ~ and I am never leaving. I hope my family will send money!

I’ve been visiting in the Keys for nearly 20 years and I learned some things this morning that I didn’t know, so here’s a bit of Islamorada info and history from my local reading. There will be lots more on our trip in the next few postings.

Visitors are sometimes confused, because there isn’t an “Islamorada Key” ~ but Islamorada is a group of keys known as the “Village of Islands”. Islamorada was incorporated by area vote on November 4, 1997 and by the Florida legislature officially on January 1, 1998. The village is actually seven different islands or keys ~ four separate livable islands (Plantation Key, Windley Key, Upper Matecumbe, and Lower Matecumbe) ~ two islands that are part of the Florida State Park system (Indian Key and Lignum Vitae Key) ~ and one private island (Tea Table Key). Here’s a map to help out with the geography ~~~ The name Islamorada translates to “purple isles” ~ and once you see the transition from sunset to evening time ocean side, you know why. Its pronunciation has been Anglicized over time to Aisle-a-more-AH-dah.

Locations are designated by Mile Markers (MM) and either Ocean Side (OS) or Bay Side (BS). The stretch of the Overseas Highway (US1) traveling the four main keys, including the channels between them, is about 18 miles long, starting around MM 90 ~ but the islands themselves are only 2 or 3 blocks wide. Prior to incorporation, Islamorada was considered to be only on the island of Upper Matecumbe Key. Today Islamorada is known as the “Sportfishing Capitol of the World.”

Several different Indians communities lived here for thousands of years, and later explorers visited these communities when they came ashore for fresh water, including Ponce de Leon as he passed through the Florida Keys in 1513.

The early settlers came from the Bahamas and New England. They raised pineapples and coconuts on plantations for northern markets, built boats and engaged in rum running during Prohibition. All of that changed when Islamorada was hit almost directly by the Labor Day Hurricane of 1935, causing 423 deaths and destroying almost everything on the islands. A memorial for victims of the hurricane can be found at MM 82 Overseas Highway.

Some people who survived the hurricane stayed and rebuilt the community. A road was constructed on the remains of Henry Flagler’s railway bed and that eventually became the Overseas Highway. I think about that when we are driving up and down the highway going to marinas, dive shops, shopping and local restaurants. The Keys may ebb and flow with change, but they are built on hardened coral. It takes a lot to beat them down ~ terrible storms, zoning moratorium or soured economy ~ they always hang in there. And boy, am I glad! We’ll visit lots of local places while here and I will post about them in the next columns.

The Moorings Village resort ~ our home for the week ~ has an interesting history too, much like Islamorada. I will do a posting on the resort as well. Until you can join me in person, there are pictures on the bluwaterlife Facebook page. The resort is so pretty you can’t take a bad picture! Moorings Village ~ my private beach for the week 🙂