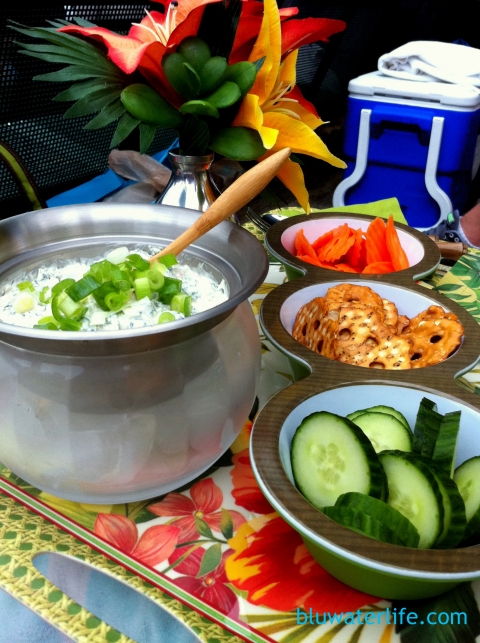 The weather gods smiled on us 🙂 After brutal heat last month at Chastain Park and rain showers on our concert day this month, I was preparing all sorts of alfresco weather contingencies.

Weather gear added a bit to our load, and I had to abandon my “one carry bag or cooler per person” guideline for the evening. But once we got to the venue, the weather gods smiled on us. A little overcast at first, and a few rain sprinkles during dinner before the show, but it held back the heat. Once the concert started, the clouds cleared and it was a very tolerable 76 degrees for most of the evening. For an August evening in Atlanta, that is very tolerable indeed! starters ~ in a tropical mood

The Steely Dan picnic was a tropical look. The trays, plates and flatware were all things bought at different times over the past few years, and I was happily surprised at how well it pulled together. I love the tropical Tiki themed tray and appetizer plates for our starter ~ and the “dip on ice” bowl! It is a little embarrassing to get so excited over a dip bowl, but hey, it’s acrylic with a brushed stainless insert and a snap on lid. It went from fridge to cooler to serving in one step, kept the classic spinach dip cool, and looked sooooo much better than a standard plastic storage container!

For our main event, we had a casual sandwich plate and our favorite cold beer. barbeque chicken sandwiches with homemade potato salad and our Family Favorite Crunchy Pickled Cabbage Slaw. main event ~ sandwich and sides, with a few sprinkles of rain

We’ve served this slaw on July 4th, at outdoor cookouts, and family pool events for at least 30 years. It can serve a ton, has no mayo worries, and keeps a week or longer in the fridge, so it is a hot weather go-to side dish ~ I’ve included the recipe below. After we stowed the dinner gear (and thankfully did not need to break out the weather gear) we delayed dessert until after dark as usual. The combination of tropical colors, candlelight and lemon cream cheese cupcakes were a low stress sweet ending.

The show was very good and as usual the adult beverages flowed freely at Chastain, so the crowd was into it. According to the set list from previous shows on the tour (what did we do before smart phones?), we got two extra songs. There were a few songs I wanted to hear but were not played ~ but we were happy to “reel in the years” with Hey, Nineteen and Pops Wages among other favorites. After the show, we stayed in our seats to let the aisles clear out before braving the exit. We were on the aisle in the center section, so we watched waves of folks pass by in starts and stops with their bags and coolers. During one of the stop moments a woman waiting on the amphitheater stairs looked over at our little set up and said, “You all win the best TV tray of the night award. That looks really nice!”  We laughed and said “thank you, we’ve had lots of practice”.

So, another successful summer event, and from my perspective there are still several weeks of summer left in the season. Of course I hold on to summer as long as possible ~ after school starts, football kicks off and everyone else thinks fall ~ until after the autumnal equinox ~ it’s still summer! There are more outdoor opportunities ahead for cookouts, tailgates and late season pool parties. I hope you enjoy them all 🙂

It’s the summertime home stretch ~ make the most of it!

Heat until the sugar dissolves and the mixture boils. Pour the brine while it is hot over the veggies and turn the slaw with tongs to ensure even distribution. Refrigerate at least 24 hours before serving, turning the slaw occasionally for crunchy pickled cabbage slaw.

This makes a large bowl of slaw. It’s easily doubled to feed an extra-large group ~ double the veggies and double the brine. For smaller amounts, I use half the cabbage, onion and green pepper – but the full amount of brine. Use a container large enough for your vegetables, but fairly shallow for even pickling. For half to full amounts, I use a covered 9×13 glass baking dish. This makes it easy to distribute the brine over the vegetables and turn the slaw as it pickles. One warning though ~ the turmeric in the pickling brine will stain anything it touches ~ and I mean anything! It will even discolor glass, so prep and store carefully. That said, it’s a great recipe for hot weather as there are no mayo worries and most everyone likes it!