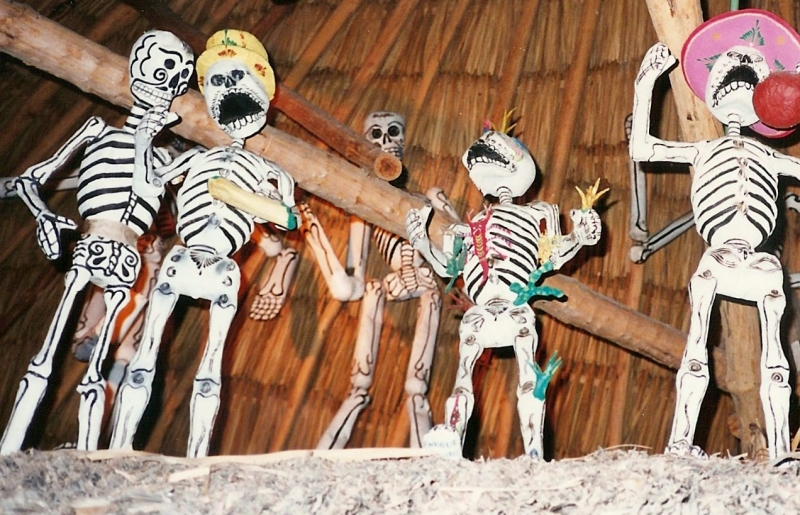 On a beautiful spring afternoon a couple of weeks before Cinco de Mayo, we’re on the patio at a local taqueria, enjoying their Saturday Taco Trio and some margaritas. Ads and décor were everywhere I looked, encouraging me to party with them on the day that celebrates all things Mexican, especially margaritas here in the States. My birthday and Cinco de Mayo are very close together on the calendar. Looking around and laughing with Bluwaterguy, I started thinking about a memorable trip to Cozumel, Mexico a while back when I celebrated in style. It was memorable for several reasons, but first a little bit about the island of Cozumel (latitude 20N 28′ 47.16″ longitude -86W 57′ 54.10″). One of the nine municipalities in the state of Quintana Roo, Cozumel lies in the Caribbean Sea off the eastern coast of Mexico’s Yucatan Peninsula, opposite Playa del Carmen, and close to the Yucatan Channel. The main town on the island is San Miguel de Cozumel, where our hotel was located. Scuba diving is one of Cozumel’s primary attractions, due to the fantastic coral reefs, which are protected from the open ocean by the island’s natural geography. In 1996, the government of Mexico also established the Cozumel Reefs National Marine Park, forbidding anyone from touching or removing any marine life within the park boundaries. Here are a couple of maps to help with the geography. I went with some friends for a trip that covered Cinco de Mayo and my birthday that year. I was obsessed with becoming an underwater naturalist and wanted to see some of the critters that are unique to Cozumel. It was all about scuba diving for four days, and one last day of sight-seeing before flying home. I’ve had great luck diving on my birthday, seeing things that are unforgettable. Cozumel is famous for drift diving ~ the underwater equivalent of flying like Superman.

Lucio was our excellent diveguide/divemaster for the trip. Here’s a quick picture and yes, that’s me with him on my birthday. We teased Lucio that the pressure was on to help us find something special for my birthday. He asked me what I wanted to see, and I said “a big loggerhead turtle”. We had seen a couple of common green turtles the previous day, but loggerheads are hard to come by. They can grow to be over 6’ long, and I think they look like a kind of flying coffee table ~ big, oval and brown. Lucio said he would do his best, but no promises. We started our dive as a group, drifting along at a moderate pace. My dive buddy and I were near the front with Lucio, knowing he would find the best stuff. He drifted around a bend in the reef, and I heard a quick, insistent tapping signaling us, so I hurried to catch up. I rounded the bend just in time to see an ENORMOUS loggerhead turtle swimming toward Lucio. I stopped ~ and unbelievably as the turtle continued swimming towards him, Lucio was able to drift out to the turtle and the turtle dropped down to the sand.

Lucio motioned me over and I slipped along the sandy bottom trying not to startle either of them. I was able to glide alongside the turtle on the sand, and stab my fingers into the sand to anchor. I had maybe 15 seconds lying beside him looking eye-to-eye ~ and I understood why people describe turtles as “wise”. He looked straight at me and I have never seen eyes that looked so ancient or wise. As the rest of the dive group came around the corner, he decided “ok, enough already”, rose off the sand and glided away. I swear I did not make this up!! There were witnesses! I released my finger hold from the sand and rose up doing the scuba version of the Snoopy Happy Dance. Unfortunately, I don’t have a picture of that particular turtle encounter as none of us had a camera of course! So here’s a turtle stand in ~ close enough in look and size to match up to my memory. Needless to say, I tipped Lucio handsomely. Even he was shocked at our good luck ~ and that was only the beginning of the day! After our second beautiful dive, we headed back in for a quick lunch. My friends went back to the hotel for the afternoon, and I went to meet up with “Mr. Bill”, my afternoon dive buddy. A local dive instructor, he was going to take me for some shore diving to look for the smaller critters that are hard to spot while drift diving. I especially wanted to see the Splendid Toadfish found only in Cozumel. Bill and I had so much fun on our two afternoon dives ~ and yes, we found the toadfish ~ that we missed the take-out spot on our second dive. Not being able to turn around and swim into the current, we drifted on down until we found a spot we could exit the water, and climb up the beach ~ right up to the sidewalk along the highway running to San Miguel.

Oh well, nothing to do but hike back to the dive shack. After diving all day, hiking along the San Miguel highway in full scuba gear is a surreal experience. It was really hot ~ and we were loaded with about 35 pounds of gear, wearing wetsuits, carrying masks, fins, and sample bags ~ and did I mention it was HOT? We trudged maybe a quarter mile, and I can say with certainty I was not cut out to be a Navy Seal! I did not whine, but I did have to lower my head and concentrate just to get one foot in front of the other.

We finally reached the dive shack at the pier, changed from scuba gear to dry clothes ~ and drank about a gallon of water each. Bill offered to give me a lift back to the hotel to meet my friends, as he said it would be easier than getting a taxi. I gratefully accepted and agreed to meet him at the pier entrance ~ where he pulled up on a moped the size of my first-grade two-wheeler. I was so tired at this point, I wasn’t going to debate alternatives. He proceeded to arrange two adults and two large bags of wet scuba gear on this tiny moped, placed what I considered to be a Little League batting helmet on my head, and away we went down the San Miguel highway. I know I cheated death on that ride ~ or at least it felt that way to me ~ Bill said it was just another day at the office for him!

We finally got to the hotel, where he joined my friends in the bar and I went up to change. The rest of the night was a fun group dinner at Ernesto’s that ended with the Cozumel classic “Tequila Headbanger” for the birthday girl. Suffice it to say it involved a stiff shot of tequila poured by the bartender, from the bottle into my batting helmet-wearing head-tilted open mouth, and the rest of the waitstaff beating “Wipeout” on my helmet-wearing head, followed by a wedge of lime and lick of salt. Yes, that officially makes me Buffett’s “woman to blame” and it was my own damn fault!

So in summary, for those roughly 18 hours of my birthday, there were 4 fantastic dives, an unforgettable encounter with a wise old turtle, a never seen before or since Splendid Toadfish, a forced march up a Mexican highway in full scuba gear, a death-defying moped ride, and ended with a Cozumel Tequila Headbanger. Happy Birthday to me!

I mentally re-lived this for a few minutes this weekend at the local tacqueria, and could not help but laugh about it. That’s one thing I treasure about my trips and stories. I can be reminded anytime, anywhere and get a laugh ~ and it isn’t even my birthday yet this year!

Remember, the Cozumel Tequila Headbanger is not to be tried at home. I barely lived to tell about it, so leave it to the professionals!