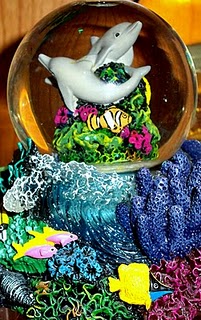 Many collections or mini collections ~ souvenirs are memory collections from other places, times and events. I love water globes and have collected these on trips to blue water destinations. It isn’t easy to find ones I really like ~ nicely detailed but not too fancy, a theme that reflects the place I am visiting, and a reasonable cost. There is an inverse relationship to a souvenir’s cost and it’s likelihood to get broken or lost on the trip home. The really expensive ones never get home in one piece! All of these came from different islands and make me smile every time I see them on the shelf.

Whether water globes or snow globes, they are perfect little vignettes. The first snow globes were probably made around the mid-1800s and the first documented snow globe was an Eiffel Tower globe that appeared at the 1889 Paris Exhibition. I guess that one was the first official city snow globe souvenir. The first globes appeared in the United States in the 1920s and also featured cities as souvenirs. I love the television show Burn Notice.  Fiona is one of the lead characters, and she’s an expert on guns, explosives and expensive shoes. In one episode we learn that Fiona also collects water globes when she uses one to cold cock an intruder in her apartment. It was a city souvenir and one of her favorites, so she is really annoyed when she has to break it over the bad guy’s head. It makes me laugh to think that water globe collecting is something Fiona and I have in common.

I like to shake these up and think about Turks and Caicos, Bonaire, the Caymans, Nassau Bahamas and the other islands these came from. It’s a mini collection of many memories and they all made it home to the book shelf in one piece 🙂