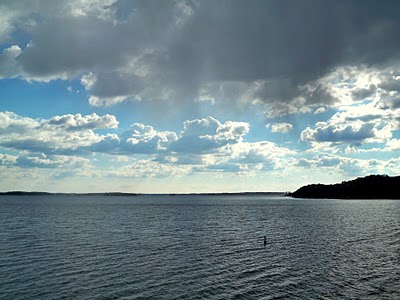 the lake view from the SC highway 24 bridge

A bit of history ~ the Hartwell Reservoir was created by the Hartwell dam project on the Savannah River, downstream from the Tugaloo and Seneca Rivers, between South Carolina and Georgia. Built as a flood control project by the US Army Corp of Engineers, begun in 1955 and completed in 1963, the lake has been there all of my life. My grandparents had a small house on Lake Hartwell when I was kid, and I will never forget the summer times there. Big screened porch looking out at the lake, Sunday dinners, boat rides, learning to jump into the lake off the dock, and (unfortunately in those pre-sunscreen years) too many sunburns.

Clemson University is also on Lake Hartwell ~ aka Tiger Lake. Years later when I went to college at Clemson, we had a student beach on the lake run as part of the old YMCA ~ of course called “Y Beach“. I will also never forget spring and summer times there. Saturdays when the water was too cold for swimming, but we all had spring fever anyway. Afternoons after class the year I went to summer school and we dubbed the season “Our Winning Summer”. And of course, football weekends. Bluwaterdad and his Clemson friends used to overnight in the motor home, parked down by the lake on Homecoming weekends in the fall. This weekend was Homecoming at Clemson. We are always big on pageantry at Clemson games, and especially at Homecoming. I snapped this shot of the Color Guard executing their flag duties with dignity and precision after the game, and then went across the stadium road to visit another pair of special honor guards. Created by sculptors TJ Dixon and Jim Nelson, these beautiful creations instantly became Clemson treasures.  The “Growling Tiger” was given by the student body and the “Vigilant Tiger” by the alumni.  I love them both, though I know my Bluwaterdad would have preferred the more ferocious “Growling Tiger” to be the alumni gift. Of course, he also thought the now famous Clemson “Tiger Paw” would have been improved with some claws when it was first introduced in 1970. Conrad Bud, this one’s for you ~ love, Bluwatergal