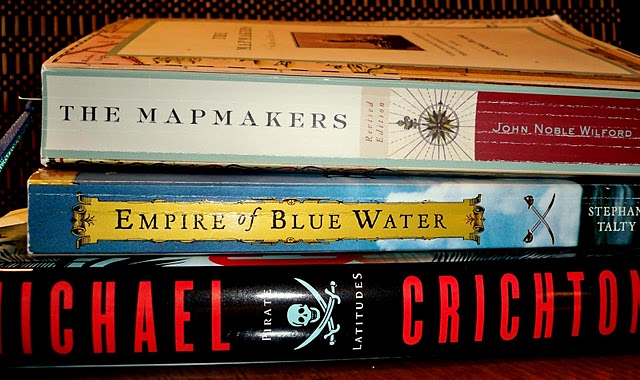 I enjoyed reading the two pirate books back to back – one non-fiction and one fiction. Empire of Blue Water is a lot of Caribbean history with a little fictional narrative; slow in spots (especially the first chapter) but very, very interesting. The story of Henry Morgan’s journey to the new world, rise to power as Admiral of the Brethren, and eventually Governor of Jamaica is tied to the politics that fueled piracy during the 17th century. The change from government backed privateers to outlaw pirates was convoluted and bloody. History repeats anytime governments provide support to fringe militia groups and then pull the rug out from them. The backlash is never good, whether 17th century pirates or 20th century Afghan mujahedeen. When will governments learn about the importance of an exit strategy! This is a fascinating read for anyone interested in the history of piracy or the colonial Caribbean. Who knew pirate captains managed their crews with incentive pay, employee elections and generous medical insurance? Of course you had to suffer scurvy or malaria and be willing to go a long time between bonuses…actually not really that much different from 21st century corporate America. Pirate Latitudes is a fun, easy go-along read. Written in 2006 and found in his files after Michael Crichton’s death in 2008, it reads as something he wrote for fun. It doesn’t have the depth of detail and research in his other books, but even “Crichton lite” is more entertaining than most. Having the historical perspective in my head from other recent readings, I give him props for fitting it neatly in and around what was actually happening in Port Royal, Jamaica at the time. The plot is tight, the period details right, and Captain Charles Hunter is the archetypal cinema swashbuckler. It reads as a screenplay ready to go. I finished it in 2 days and hope to see it as a movie! In this day of Google Earth and MapQuest, even the most directionally challenged can find their way. I am obsessed with maps and compasses in all forms, from my Iphone GPS app to my Voyager compass from Dalvey of Scotland. So, a holiday gift a few years ago from a work friend (thanks MW!), The Mapmakers by John Noble Wilford had to join the favorites on my bookshelf. It covers the history of cartography or map-making from ancient times to the present day…including the development of map projections, problems in determining latitude and longitude, navigational devices, and people who pioneered map making concepts. When you read about Eratosthenes (librarian of the great Alexandrian Museum) and his experiment to measure the earth’s circumference, and then think about our day-to-day use of satellite imagery to find the nearest coffee shop, it’s truly a marvel what happens when someone wonders, “Where the heck am I?”

Enjoy these reads, or share with someone who might…after all it is gift giving season!  Bluwatergal