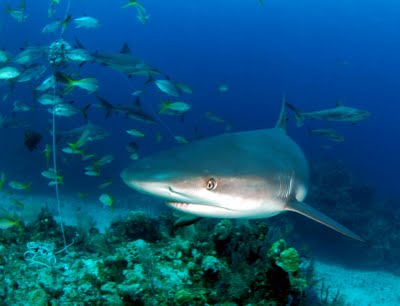 Fins up! These aren’t the margarita loving Parrothead fins. These are the Real McCoy from my shark dive experiences.

Question:  are you statistically more likely to be killed by 1) a lightning strike  2) a falling coconut hitting you in the head  3) a shark attack?  In defense of sharks, they are the least of the problem. It’s scary lightning and those pesky coconuts that are the real danger!

Now before the statisticians take issue with these metrics, remember “there are lies, damned lies, and statistics” {thank you Mr. Disraeli & Mr.Twain}. I can only speak from my personal experience, and that is in general sharks aren’t interested in being around people when they can tell we aren’t part of the food chain.  It’s when you look like something they might eat ~ a turtle, a seal, something splashing around like a wounded critter ~ that their primordial feeding instinct takes over. Nurse sharks are regular sights on warm water dives, usually on the bottom under a reef ledge ~ and yes, they are real sharks ~ but completely uninterested in divers unless you aggravate them. In that case, it’s their ocean so the who’s the aggressor and who’s the victim?

The ones that make you squeal “SHARK!” into your scuba regulator are reef sharks, tiger sharks, the black tip shark and the dangerous bull shark. They get my full attention!  You might see one of these if you are the first person in the water on 2 or 3 out of 100 dives ~ and not for long as they quickly zoom out of sight. Really the only way to see sharks in any number is on a shark feed dive, like the ones in these photos from the Bahamas. I’ve been on several of these; each one is an unforgettable experience. There is a fair amount of controversy about shark feed dives ~ and having the sharks associate people with food. Shark feed dives are not allowed in US waters, but standard in the Bahamas.

In my experience, it appears the sharks know the difference when they can see you clearly. Divers don’t look like the bait ball and vice versa. That said, you do have to keep your arms tucked in and remain still. If you get in their way, then who’s at fault? If a shark is headed full-bore towards a tasty bit and you decide now is a good time to start swimming around for a photo, then you are responsible for whatever happens. It’s their ocean, we are wimpy visitors. I am not sure what gets your adrenalin up more ~ seeing a dozen pointy fins circling on the surface before you giant stride into the water on a shark dive, or cruising serenely along enjoying the scenery and encountering a shark surprise. Both will curl your toes.

My most memorable shark encounter wasn’t photographed but is forever imprinted in my mind. Last dive of a liveaboard trip in the Cayman islands and moored off Grand Cayman on the North Sound wall {latitude 19N 20′ 35.28″ longitude -81W 15′ 56.20″}. I had opted out of a larger group dive after lunch and waited for the “open pool” time in the late afternoon. Everyone else was napping or had gotten an early start on the cocktail hour, so one of the divemasters from the boat buddied up and we splashed in on a beautiful Thursday afternoon.

We descended to 80′ and started our leisurely tour of the wall. Just a few minutes into the dive I heard my divebuddy Courtney shrieking into her regulator behind me. I stopped and turned, saw her pointing down ~ took a look ~ holy#$@%!!  About 20′ below us was a 12′ hammerhead shark silently swimming along like an underwater stealth bomber!

We just hung there suspended in the water column close to the wall, trying to breathe normally like good scuba divers. A lot goes through your head in those moments. Mostly I was trying to imprint the image in my head, while maintaining my position. Big strangely shaped head slowly moving side to side, tail moving minimally but pushing him quickly through the water ~ he was gone in a few moments. We did an underwater high-five, looked around again and then ascended to 50′ to finish our dive.

This particular shark had been sighted before on the wall, and some of the crew had tried to catch a glimpse for years. I had tourist good luck. Whenever I see a shark on a dive, I consider it good luck. Also, I don’t push my luck when swimming or playing in the surf at the beach ~ that’s when you look like food.

If someone teases me about not wanting to get too far from the beach or splash around like a wounded seal in the surf, I think of the hammerhead below the surface ~ and say,”it’s fine, just go on out there on your own” ~ and good luck!

High and dry for the duration ~~~