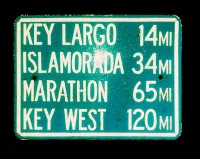 My route to the Conch Republic always goes over the Card Sound Bridge (latitude 25N 17′ 32.16″  longitude -80W 22′ 52.51″).  I love the transition from the mainland into the Keys.  It is the road less traveled, as most people just take US1 directly into Key Largo.  It takes a few extra miles to cross Card Sound, but the extra time gives an opportunity to reset your clock to Keys time and adjust your head to a different frequency.
After the turnpike tollboths and outlet malls, when you make the left turn onto SR905A more than just the scenery changes.  The air smells different, the water sparkles behind the roadside brush, and traffic changes to an infrequent car in either direction.  Getting stuck behind the battered pick-up putzing along @ 40 mph is inevitable, but that is part of adjusting to Keys time. I try to time it so that I can stop at Alabama Jack’s just before the bridge and enjoy a grouper sandwich and a brew – another opportunity for mental adjustment and a chance to catch my breath after the frenetic run through Miami.   After lunch, I am really in Keys mode and ready to “cross the bridge”. The original Card Sound Bridge was conceived at the time of the Overseas Highway and expansion south.  Dade and Monroe Counties agreed to build a highway connecting Florida City to Key Largo in 1922.  The wooden swing span drawbridge and road were both nearly ready for opening when a major hurricane seriously damaged both on September 18, 1926. The bridge was redesigned and rebuilt, raising the water clearance to accommodate the storm surge. On January 25, 1928, the 2800′ wooden Card Sound Bridge was finally opened to traffic.  A 1944 fire seriously damaged the wooden bridge and a 1947 hurricane and additional fires caused Monroe County officials to remove the Card Sound Bridge completely.  The creation of a National Park around Biscayne Bay in the 1960’s included a new 65′ high causeway to be the new Card Sound Bridge.  The new causeway was completed and open to traffic in 1969. The new tall bridge gives an interesting perspective – straight up!  I like the drive over the top and then seeing the slope down the other side.  I think it’s the best $1 head clearing ride in the south.   When I am stuck somewhere I don’t want to be, it’s one of my go-to mental escapes.  As I had some bad luck recently and am out of commission for the duration, I will be thinking about my escape route to the Conch Republic while I am confined to the sofa.
If only I had a grouper sandwich and brew from Alabama Jack’s I think I might survive…Bluwatergal