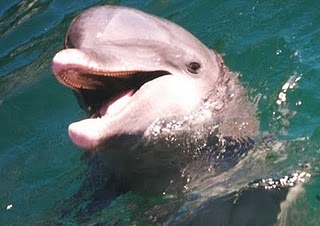 Personality, intelligence, and a face anyone would love. Could this youngster be any cuter? These are a couple of the wild dolphins from the Roatan Institute for Marine Science (RIMS) at Anthony’s Key in Roatan, Honduras.

Founded in 1989, the institute’s focus is the preservation of Roatan’s natural resources through education and research. Areas of study include tropical marine ecosystems, bottlenose dolphins and the ecology of coral reefs in the Caribbean. I had an unforgettable dolphin encounter there during a visit in August 1997. The dolphins are wild, and come to visit at the institute whenever they choose – and they choose often, as they like the fun and games apparently. Visitors have a choice of a shallow water experience or open water scuba dive – I (of course!) opted for both. The photos are of a female and a calf that were up-close and personal with us on the swim platform. Louder, funnier and more slippery than you can ever imagine. The louder and funnier part became even more apparent on the open water dive.

Our group of 8 divers went out on the boat with a trainer from the institute.  As we waited patiently in a circle on the bottom at a depth of about 55′, on our knees in the white sand, we began to hear clicks and whistles.  Then a pod of 4 dolphins swam into view and and swam around our circle of divers.  We had been instructed to keep our hands folded and not reach out to touch.  Just to observe and let the dolphins swim around the group. You could see the ear-to-ear grins on each of our group even under the scuba masks and regulators! The largest of the dolphins swam into our circle of divers. I later learned from the trainer this particular prankster was named Esteban – and well-known to the institute.

He slowly swam around the inside of our circle looking at each diver. After he completed his circle, he swam a bit more – and then stopped directly in front of me! Me! Esteban picked me!! He pivoted to face me head on, and tilted his head slowly right, then left. He looked me up and down, all the time smiling and nodding.

I thought, “This is the coolest moment ever! He’s pinging me! It’s dolphin echolocation…I am so connected with this wild dolphin!” 15, 20, 30 seconds pass. At the point where I was transported to a zen moment, Esteban let loose the loudest dolphin cackle you can possibly imagine. You know that cackling sound Flipper made? Well imagine it in the quiet underwater world at peak volume, 20 inches from your face! I levitated off the sand 12″ straight up, in a huge cloud of bubbles from my scuba regulator. As I floated back down to the sand, Esteban gave a no,no,no headshake and a gleeful dolphin snicker before heading out for a victory lap around our group! I don’t know if he was saying hello, goodbye, kiss my dolphin tail – or just playing psych the tourist – but in any case I fell for it like a ton of bricks.

After the circle visit our dive group began to swim slowly along, with the dolphins clicking and whistling and zipping around us doing fly-bys, barrel rolls and other acrobatics. The 45 minute dive seemed like 10 minutes we had so much fun. Who knows why I was singled out for dolphin pranks? I hope it is because Esteban thought I was special. Either that or I was just the subject of dolphin humor among the pod later on after we were gone. 🙂

Here are a couple of photos from Anthony’s Key Resort. (latitude 16N 19′ 45.41″ longitude -86W 34′ 20.77″) It’s one of the original eco-resorts. Beautiful and natural – with spectacular diving off the world’s second longest barrier reef system. If you happen to visit there, ask about Esteban. He’s sure to give you the laugh of a lifetime!