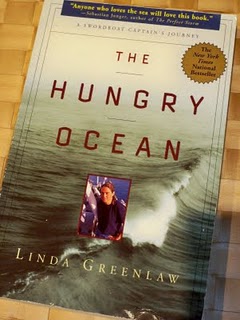 Anyone who has spent time around boats on the ocean or just likes a good story well told will enjoy learning about Linda Greenlaw and reading The Hungry Ocean: A Swordboat Captain’s Journey. I read it in the fall of 2000, and it has a place on my favorites shelf. I’ve posted the review and info from the writer’s website below.

The term fisherwoman does not exactly roll trippingly off the tongue, and Linda Greenlaw, the world’s only female swordfish boat captain, isn’t flattered when people insist on calling her one. “I am a woman. I am a fisherman… I am not a fisherwoman, fisherlady, or fishergirl. If anything else, I am a thirty-seven-year-old tomboy. It’s a word I have never outgrown.” Greenlaw also happens to be one of the most successful fishermen in the Grand Banks commercial fleet, though until the publication of Sebastian Junger’s The Perfect Storm, “nobody cared.” Greenlaw’s boat, the Hannah Boden, was the sister ship to the doomed Andrea Gail, which disappeared in the mother of all storms in 1991 and became the focus of Junger’s book. The Hungry Ocean, Greenlaw’s account of a monthlong swordfishing trip over 1,000 nautical miles out to sea, tells the story of what happens when things go right–proving, in the process, that every successful voyage is a study in narrowly averted disaster. There is the weather, the constant danger of mechanical failure, the perils of controlling five sleep-, women-, and booze-deprived young fishermen in close quarters, not to mention the threat of a bad fishing run: “If we don’t catch fish, we don’t get paid, period. In short, there is no labor union.” Greenlaw’s straightforward, uncluttered prose underscores the qualities that make her a good captain, regardless of gender: fairness, physical and mental endurance, obsessive attention to detail. But, ultimately, Greenlaw proves that the love of fishing–in all of its grueling, isolating, suspenseful glory–is a matter of the heart and blood, not the mind.

Linda Greenlaw’s three bestselling books about life as a commercial fisherman — THE HUNGRY OCEAN (1999), THE LOBSTER CHRONICLES (2002) and ALL FISHERMEN ARE LIARS (2004) — have climbed as high as #2 on the New York Times bestseller list. She is the winner of the U.S. Maritime Literature Award in 2003, and the New England Book Award for nonfiction in 2004. Time Magazine called her 2005 RECIPES FROM A VERY SMALL ISLAND, co-authored with her mother Martha Greenlaw, a “must-have cookbook”. Before becoming a writer, Linda Greenlaw was the captain of a sword boat, the career that earned her a prominent role in Sebastian Junger’s THE PERFECT STORM and a portrayal in the subsequent film. She has been featured onGood Morning America,Today,CBS Sunday Morning,The Martha Stewart Show, andNational Public Radio. She now lives on Isle au Haut, Maine, where she captains a lobster boat. When Linda Greenlaw confessed a desire to write fiction readers responded with an enthusiastic “Please do!” At last, she satisfies their hunger with SLIPKNOT, a sharp-witted, compulsively readable mystery, the first in a series featuring marine investigator Jane Bunker. As she proved in THE HUNGRY OCEAN, no one knows the sea like Linda Greenlaw. And as she proved in THE LOBSTER CHRONICLES, no one has a better way with the telling details of Maine village life. SLIPKNOT delivers everything readers want: a great setting, wonderful characters, an authentic and original detective — and a story that will keep them on the edge of their seats.