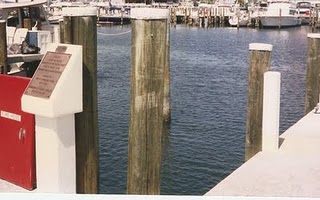 Travis McGee is a boat bum. He is authentic blue water, from his boat shoes to his deep water tan. He likes jazz and gin. He lives on The Busted Flush – a custom 52’ houseboat won in a poker game – docked at Slip F18 Bahia Mar Marina, Fort Lauderdale, FL. (latitude 26N 6’ 51.22” longitude -80W 6’ 29.58”). Travis lives off the grid, and likes it that way. He’s “taking his retirement in installments”, working when his cash reserves run low. His business card reads Salvage Consultant – but he actually recovers missing or stolen goods for half their value when legal means have been exhausted. Usually the lost items are valuable property like jewelry or real estate, but sometimes it’s a missing person or a lost reputation. Travis McGee is John D.MacDonald’s fictional character who appeared in twenty-one novels over twenty years, from The Deep Blue Good-by in 1964 to The Lonely Silver Rain in 1984. The McGee novel The Green Ripper won the National Book Award in 1980. The novels each have a color named in the title and the series has sold more than 40 million copies worldwide. I have 2 complete sets of the series. One set collected from used book shops with the original vintage – often lurid – covers. The other set made up of the more recent reprints. I’ve read each book several times and am a card-carrying McGee fan.
I found the series in 1994 – 30 years after the debut – when reading a column from a book critic who was lamenting that Travis never got his due as an American literary character. There was a passage from The Empty Copper Sea about Travis replacing some teak decking. The description was so real I could smell the teak and the salt air. I went out and bought my first McGee book that day. I was hooked. The difference in these books compared to other crime novels is McGee’s philosophical internal running monologue. McGee’s image of himself throughout the series, is of a knight in rusty armor with a broken lance and swaybacked steed, fighting for what he fears are outdated or unrealistic ideals. Travis observes and comments on whatever strikes him – human emotions and interactions, environmental impact from over development, the economy, physical fitness, even comparisons of his favorite gins.
While some of his perspectives seem dated now – don’t get me started on “the beach bunnies” – Travis was ahead of his time in many ways. He was railing against the damage to the Everglades decades before the Florida environmental movement existed – when everyone else thought it was a great idea to drain the swamp. As the first adventurer in the south Florida genre, McGee was the predecessor character for other writers like Elmore Leonard, Carl Hiaasen, and James W. Hall. In 1994, Hiaasen acknowledged this in the introduction he wrote for a new edition of The Deep Blue Good-by. He noted that even though MacDonald had died eight years earlier, McGee was likely still around – on the deck of The Busted Flush sipping his Plymouth gin. A few years after I first read the series, I was thinking about getting my scuba instructor certification, and when I found there was a dive school at Bahia Mar – home of Travis McGee – I took it as a sign. I went down to Fort Lauderdale for a few weeks in May 1997 to earn my instructor rating. During the weeks I was there, I walked down to Slip F18 everyday at lunch time. I guess I was looking for Travis. The Friends of Libraries U.S.A. had decided to institute a series of literary landmark plaques, and the first one installed was at Slip F18 – home of The Busted Flush. This is my picture of the marker from 1997. I understand it has been moved and refurbished since I was there – away from the actual slip and closer to the entrance to the dock. I liked it this way – the lines coiled and hung on the piling, like Travis is out for the day but due back anytime. I’ve wondered why Travis had not made it in Hollywood. I know there were a couple of bad attempts in the 70’s & 80’s, but he’s a natural character for a movie franchise today. I read recently that Fox had acquired the literary rights and New York-based producer Amy Robinson is developing the first McGee novel, The Deep Blue Good-by, for production by Fox. Robinson called McGee “the man every woman wants to be with and every man wants to be.” I think I can guess what Travis would say about that.

Time to raise a glass to McGee…Bluwatergal